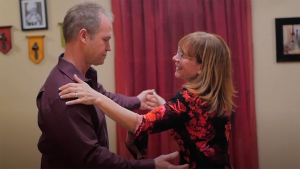 Two summers ago, my husband, Jerry and I decided to take ballroom dance lessons.  I was surprised that Jerry liked the idea when friends suggested it, and so I was game!

Up until that point, our dances together involved shifting our feet back and forth and an occasional spin.  This is the best description I can come up with to emphasize that we were starting at the most basic of levels. And, it was very apparent at our initial lesson when other couples working with their instructors were bopping and twirling around us on the dance floor.

Our first few lessons consisted of us taking just a few short steps back and forth or marching in place. We were slow and awkward, the exact opposite of elegance.

Jerry and I still laugh when we think of our instructor, Elana, firmly commanding in her thick Russian accent to “keep moving Jerry”, prompting him to continue to move his feet while guiding me in a spin.

Yet, as awkward as it was, it was still fun.  And at some point, it occurred to me that it had been quite a while since I had tried anything brand-new, and I liked the challenge.

Now, we didn’t just dance at our lessons. We also practiced at home, almost every night.  We cha-chaed in the kitchen, rumbaed in the living room, and sometimes we tangoed in the basement as our cat, Annabelle critiqued our progress.

And I think even Annabelle would agree, we eventually improved.

I noticed that over time, we didn’t need to think about the actual dance steps as much, and we were able to get into the music and the experience more.

Elana told us about muscle memory. She explained that with repetition of movement, the body has the ability to reproduce the movement with no conscious effort. And so, as we rehearsed, it was like we turned our dance muscles on autopilot.

I was thinking about this today as I reflected on a conversation I had with a client earlier in the week.  She was frustrated with herself because she felt stuck in an old-thought pattern that was getting in her way.

I talked with my client about how practiced she had become over the years with some of the thoughts that were no longer serving her, as some most-likely originated all the way back to her childhood.  I explained that it would take time and intention to practice the new thoughts that inspire her, but it would be oh, so worth the energy.

Nothing beats the empowering feeling of knowing that you can change anything that is not working in your life with a simple mindset shift!

But, just like when you were learning to drive, you’ve got to be willing to practice.  And, you must give yourself grace as you do and be open to the idea that progress is possible.

Then eventually, just like how you no longer have to consciously think about putting your foot on the brake pedal when you come to a stop sign, you won’t have to deliberately look for the thoughts that support your dreams.  With practice, those thoughts will become second-nature, replacing the beliefs that were getting in your way.

Now, I should mention that I’m not talking about the kind of practice that feels obligatory and boring. For instance, I don’t have fond childhood memories of practicing the piano.  That kind of rehearsal came from a place of duty, and it wasn’t fun.

I’m talking about the kind of energy that was generated in our dance lessons.  It was light and playful and came from a place of inspiration. That’s what it’s like to shift your mindset.

So, if you are ready to uncover the beliefs that aren’t working for you and create new ones that support what you want for your life, let’s connect and talk about it.  Positive change always starts with the kind of thoughts that light you up and inspire you into action.

You know, it’s kind of like dancing the cha-cha!