Where Did the Morning Go? 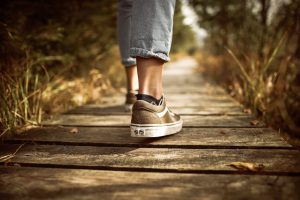 And at first, I was telling myself, “I just don’t know where the morning went.”

But, if I’m going to be honest here, I’ve got to say, I actually do.

I had two early morning coaching sessions with clients that day, and so I decided to take my walk afterward.

But once my meetings were over, I spent some time spinning in thoughts about extremely important life decisions like: “Should I eat breakfast before or after my walk today?” and “Can the thing I need to get in the mail wait until tomorrow, or should I work on it before I go and get it in the mail today?”
You know, really “important” stuff.

These questions led to further considerations, like “What should I eat for breakfast, something light or substantial?” and other such quandaries.

As you might imagine, with all of these riveting matters swirling around my brain, I began to feel overwhelmed. So, I chose to put my walk off further, and take a shower while contemplating it all.

Getting dressed after my shower seemed to take forever.  Of course, I was listening to a coaching podcast and taking notes as I got dressed.

Oh, and there was also the occasional pinging of my phone notifying me that there were some urgent matters that required my attention now that it was getting towards mid-day.

I tended to a few text messages, a phone call, and a priority email that needed to be answered right away.

Eventually, I prepared my mail to go to the post office, put my coat on, and headed out the door for my “morning” walk at 1 p.m.

Has this ever happened to you?

Have you ever had really good intentions for the day, but before you knew it, you were side-railed by some unforeseen event, or worse yet, your own indecisive brain?

This is one of the reasons why establishing solid habits that support what you want for your life is so important.

When you create a habit for yourself, you take away the need to make a decision about it each time, and this can make life much easier. Habits help you act automatically, freeing up your brain, like you are on auto-pilot.

For instance, you most likely brush your teeth shortly after getting up in the morning, and you probably don’t give it much thought anymore.  It’s a good habit that you created long ago that works for you.  You don’t have to think about it each time and decide, “Do I want to brush my teeth today?”

So, what happened to me Friday morning?

Well, I typically leave for my walk shortly after finishing my morning coffee each day.  And, once I strayed from my routine that morning, my brain got busy making an uncomplicated situation ridiculously complicated.

Whenever you chose to establish a new habit, it will most-likely feel challenging at first.  This is because you have to make the decision each time to do (or not do) the thing over and over again. Much repetition is needed before a habit is established.

It’s worth the effort though, because eventually, it won’t take effort at all.

What new habit are you ready to create?

How will getting yourself on auto-pilot with this habit impact your life over time?

What you do now, you will feel later.  This I know for sure.

As for me, I’m back on track with my morning walks.

Did you ever wonder why re-establishing a habit can feel even more difficult than it did the first time around?

Usually, it’s because your initial thoughts might tell you that something is “wrong” due to the amount of effort that is required to get going again.

This happened to one of my clients recently when she decided to revisit a weight-loss plan that she had been successful with before.

“I don’t know why it feels so hard now.  It was honestly so simple and easy when I did it before,” she told me.

Ah, but I remember what actually happened because I was her life coach then too.

As I recall, when she started the weight-loss plan the first time, it took her a period of trial-and-error to figure out what healthy foods she would like to eat, and how to make them easy and convenient for her lifestyle.

Initially, her mindset was wobbly. With every meal, she had to make the decision to stick with her goal.

Interestingly, my client only remembers the easy part now, the period after the habits were already established.

And so, as she is beginning again, she has been telling herself that “something is wrong,” because it is more work than she anticipated.

This thought can often be the one that makes re-establishing a former habit so difficult.

Nothing has gone wrong.

It will get easier with time.