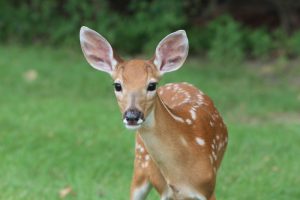 I don’t recall seeing many noticeably young fawns in the wild before, but I was blessed to see three since the beginning of July.

The first was when I looked out my dad’s kitchen window into his wooded backyard to watch all the animals that frequented his bird feeders.  The usual squirrels, chipmunks, rabbits, groundhogs, raccoons, and of course, birds were there enjoying their evening meal, and we joked that it was just like a Disney movie.

It was right about then that a tiny, wobbly legged fawn stepped out of the woods and looked around, as if it were deciding whether or not to join the party.  But it didn’t take long for it to timidly head right back into the woods.  The Disney scene was a wrap.

The following week, while on my morning walk by the lake, I just so happened to peer into a thick part of the woods along the path at just the right time, and I saw a mama white-tailed deer with her adorable, young fawn standing next to her.  The mama kept her eyes on me as I walked past, and I complimented her on her beautiful, new baby.

Then, the very next day, on the other side of the park, I heard a rustling in the woods as I was passing.  When I looked to see what was making all that fuss, I met the inquisitive gaze of a darling, little fawn. It must have been on the path as I turned the corner, startled as I approached, and then jumped into the thicket.

I was surprised to see that the precious little one hadn’t run off and was standing just a few feet away from the path, nibbling on leaves and curiously observing me.  I spoke in a reassuring voice to my new friend as it continued to graze, and it watched me intently, with no apparent fear. This went on for several minutes, and the connection was delightful.

I was moved by this beautiful experience, and I felt graced to be present in the vibrant energy of this sweet, enchanting creature.

I thought about this during the rest of my walk that morning and found it interesting that I had so many fawn encounters this month.  I thought about how even though they had appeared so frail and wobbly on pencil thin legs, they were actually stronger than they seemed, able to tread through the woods in fearless innocence.

And later, I researched the symbolism of the fawn in Native American Lore, and found that it is a representation of love, essence, and illumination.  It is symbolic of the silence and solace that results beyond challenging circumstances and transformations.

I found this interesting because this has been a time of change for me.  I love the reminder from Mother Nature that life renewing transformation is often on the other side of life’s trials.

And so, if you are going through a challenging period of change too, I hope you will keep this in mind.  Like the fawn, you are much stronger and courageous than you may realize.  Be gentle with yourself. And, don’t be wary of the winding path in front of you. It always, at some point, will lead you back to a place of peace, solace, and love.