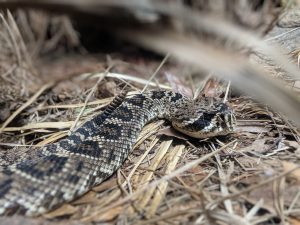 A situation occurred recently while on my morning walk that really made me laugh!

I want to share it with you, not because it makes me look like a stable, competent adult (because it certainly does not), but because there is a life coaching lesson tucked inside this not-so-harrowing adventure.

One morning, as I started out on my walk, I saw the most enormous snake I have ever seen slithering fully across the muddy path and into the grass!  It would be an understatement to say that it took me by surprise!

As soon as I saw it, I stopped dead in my tracks and stared.  I was still relatively far away, and so I squinted my eyes to try to focus in on what I was seeing.

“I didn’t think there were snakes like this in the area,” I thought.  “This doesn’t make sense.”

Then, “I wonder if this was someone’s pet and they let it loose?”  Yep, that sure seemed like a possibility.

That’s when I heard a rattling noise, and I got a little more freaked out!

I remembered all the stories my mom had shared with me growing up about my grandfather’s adventures with rattlesnakes when he worked for the railroad in West Virginia.

Could it be a rattlesnake?

“No, that can’t be right,” I thought again.  “There are no rattlesnakes in Northeast Ohio.”

Oh, but wait, I remembered the scenario I had just concocted a few moments prior.  “Oh man, maybe someone let a pet rattlesnake loose in the park.  That’s so irresponsible!  Some unsuspecting person could really get hurt!”

That was the thought that did it.  You didn’t have to warn me twice!

I turned around and headed the other way, lickety-split!

There are several trails that loop off the one I was on, and so I was glad to be able to avoid a closeup snake encounter and still get my walk in.

However, as I walked, I kept thinking about the heartless person who would let a pet loose in the wintertime.  It made me sad to think that this poor snake might not be able to survive due to someone’s foolish act.  I also thought about how if it did survive, it could possibly bite someone in the springtime when the park was busier.

I was feeling troubled as I thought about all of this, and then I also started to wonder if I should call the park system and notify a ranger?  These thoughts occupied my head for awhile as I navigated what I might say when I called.

I mean, I might sound a little crazy, right?

The path I was walking on looped around, and eventually, I was on the other side of the path where I originally saw the rattlesnake.  When I peered down the path to make sure it was gone, I was surprised to find it still there!

Okay, this was weird.

I had been walking for about thirty minutes by then, and so it made no sense that the rattlesnake could still be crossing the path.  I squinted again, and I really looked.

Well, here’s where I have to admit how ridiculous I am.

As I focused my eyes on the snake, I realized that it wasn’t a snake at all!

In fact, it was a long, thick vine that had fallen across the path.  And, although it was moving slightly with the wind, it definitely was not slithering. Yep, that’s why it was still in the path.

Now, while most people might have wisely kept this story to themselves, I feel compelled to share it with you because it is such a great example about how fear is almost always just a thought we’ve created with our mind.

Did you see how I did this with my snake story?

Not only was I certain I saw a snake, but I then identified it further as a “rattlesnake”, and created a story about how it arrived in my neck of the woods (literally).

I even heard it rattle!

Magnificent imagination I have, I know.

And with that story, I crafted another story about the terrible villain who abandoned this innocent, but dangerous creature.

I also invented a problem for myself, questioning if I should report this snake sighting, and if so, to who?

I felt scared, worried, angry, disgusted, and sad…. All because a vine was laying across a path in the woods.

And, I even changed my course.  I walked in a completely new direction, in order to avoid a danger that I made up in my head!

Now don’t judge me here, or at least not too harshly, because we humans do this all the time!

How many times have you been afraid of something, and then worried about it so much that your fear grew bigger and bigger in your mind?

Did you ever change your course as a result?

Have you ever backed away from something or not done it altogether because of what you imagined could possibly happen?

And have you ever felt scared, worried, angry or sad about the stories you created with your thoughts, but without ever really checking out the facts?

I’m guessing I’m not the only one.

Most of our fears originate from stories we have crafted in our minds.  The thoughts feel very scary and real, and then we react to them.

This is what I have noticed holds people back the most.

If fear is holding you back from what you really want for your life, I encourage you to take a second look at it, like I did from the other end of the trail.

Are you really being honest with yourself about what you are fearing?

Are you focused on the actual facts or the stories and beliefs you invented with your very creative brain?

It can be difficult to tell sometimes.

Clearly, I get it!

PS – If you need help sorting it all out, let’s connect.  I can provide you with an unbiased, new perspective that can help you move forward!