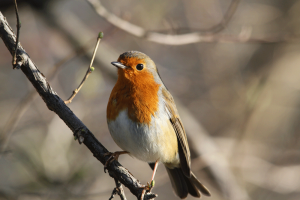 The sun was shining brightly when I went for my walk a few weeks ago, and the temperature was in the 60’s. As you might imagine, this is very unusual weather for January in Northeast Ohio.

The warm air and sunshine felt absolutely delectable, but the very best part for me was the sound of the birds. The trees at the Bluffs were filled with them and they were singing songs of springtime. It was such a happy sound!

At one point, I looked up into a tree with bare branches, and it was filled with robins.

“Silly robins,” I said, “you’re not supposed to be singing your songs here in January!”

The robins though did not pay one bit of attention to my criticism. They had no thoughts about what they weren’t supposed to be doing, and they just sang in delight in the warm air and sunshine.

As I continued on my walk, I passed a couple donning binoculars who appeared to be serious bird watchers. I smiled at them as I walked by and said, “It feels like spring, doesn’t it?”

The man smiled back and said “yep,” but then he looked more somber. “It won’t last long. Reality will be setting in soon. January is not supposed to be this nice.”

I didn’t let him dampen my spirit, but I did find his comments humorous.

And, why would we waste this beautiful day thinking about the cold weather that might come on another day?

Furthermore, who says it’s not supposed to be warm in January? Clearly the birds were not concerned about this “fact”.

As I walked, I pondered a similar conversation I had with a client the evening before.

This client spoke with me about feeling frustrated with a project she was trying to complete at work. She told me it was taking her much longer than it was supposed to take, and she was feeling bad about herself as a result.

I encouraged this client to challenge her thought that the project wasn’t supposed to take so long. She is new to her position and really had no basis for the arbitrary timeline she had set, yet she was reporting it as a fact.

And the negative feelings that resulted for her only confirmed this “fact” in her mind.

Her thoughts went to “something has gone wrong”, and that filled her with anxiety. Consequently, this got in the way of her being able to work efficiency and eventually created the results she feared.

If so, next time consider how you are feeling. If these thoughts are bringing up feelings of anxiety for you, then your brain has decided that something has gone wrong.

This would be a great time to ask yourself, “Says who?”

Think of the birds happily singing in the warm January sunshine.

What if everything is unfolding perfectly?