Marriage on the Rocks 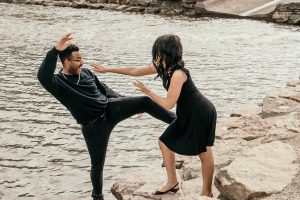 I recently heard a story from one of my dad’s caregivers, Cindy, that demonstrates so clearly how our thoughts create our results, that I just had to share it with you.

So, with Cindy’s permission, here it is:

Cindy and her husband, Tom, have been married for many years and are very active in their church community.

Cindy told me she was quite taken aback one day when Tom called her from work and suggested they enroll in a class their church was newly offering called Marriage on the Rocks. Cindy said she was stunned.

She said, “I thought we had a good marriage.  I couldn’t understand why he thought our marriage was on the rocks!”

Cindy told her husband that she’d have to think about it and get back with him.

And she said for the next few days that followed, she stewed and ruminated about the state of their marriage.

Had she missed something?  Why did Tom think their marriage was in trouble?  She began to replay their recent interactions over and over in her mind.

She wondered…
Have I perceiving things all wrong?
Has Tom grown tired of me?
Does he not find me attractive anymore?
Have I done something to upset him?
Why isn’t he being more direct with me?

The more Cindy thought about it, the angrier and more hurt she became.  She withdrew from Tom and stopped talking to him altogether. Her sulking went on for several days.

When Tom asked her what was wrong, Cindy refused to answer.

She thought, “He should know what is upsetting me!”

Things hit a breaking point when the couple went out to dinner with their two adult children, and Tom spoke openly in front of them about the class their church was offering. He told their children that he was excited about it and hoped that Cindy would agree to attend with him.

This was too much for Cindy! She felt appalled and humiliated.

She burst out crying, “How can you talk about our troubled marriage in front of the kids when you haven’t even spoken with me about your feelings directly?”

Her reaction took everyone by surprise.

Tom just stared at his wife as she said, “I didn’t even know you thought our marriage was on the rocks!”

Then, Tom smiled and reached for her hand.

“No, honey, I don’t think our marriage is on the rocks!  The class is called, Marriage on the Rock.  I think we have a great marriage and this class will only make it stronger,” he said.

Cindy said she felt an instant sense of relief, and they all started laughing.  Oh my gosh, what a big difference one little “s” can make!

Later, Cindy told me she spent some time reflecting on what happened.

She said she had always known deep down that she and Tom had a solid marriage, especially because they share such a tight spiritual bond.

And so, Cindy was astonished at how easily her belief changed to “something is wrong in our marriage”, and at how this thought then influenced her behavior.

Her actions actually began to create the result she feared! Something truly WAS wrong in their marriage.

This is the reason I wanted to share this story with you. It’s a clear illustration of how our thoughts about our circumstances, not the actual circumstances, create our results.

Nothing had changed in Cindy and Tom’s loving marriage, except Cindy’s thoughts about it.

Once Cindy had thoughts about having a troubled marriage, emotions of sadness, anger, and mistrust were triggered.  She then began to ruminate and question all that she knew to be true, looking for evidence that she and Tom had issues.

Cindy also began showing up differently in her marriage.  She was quiet and uncommunicative with Tom, which was very unlike her usual bubbly personality.

Tom could sense that something was wrong, but she wouldn’t tell him what was bothering her.  One might imagine that he probably started questioning the state of their marriage then too.

Most of us have been conditioned to believe that although we have some influence over our outcomes, much of our happiness and success is determined by circumstances outside of our control.

This type of disempowering thinking can keep us feeling stuck for years, desperately waiting and hoping for our situation to miraculously change so we can then take action.

This is why the insights gained through life coaching can be so powerful.

A mindset shift can help change the trajectory of your life.

What results have your thoughts been creating?

Are your actions generated by feelings of inspiration?

How are you showing up?

If you aren’t feeling excited about your future, let’s connect.

You have more freedom and power than you may realize!